Is this place still alive?
Hi everyone, it's my first time posting here after always coming back to read, nice to meet you guys! :)
I've been hopeless going for pink hair and decided to ask pink hair experts.

My hair adventure began last year when I finally decided to go pastel pink. Being asian hair and making mistake of doing henna before, it took me a long time, a lot of money, and much damage until I got to the blonde that was light enough.
As I don't have any experience with bleaching hair I went to a salon, and at that time she broke base to brown instead of bleaching the root(almost an inch), which turned a bit brassy later on.
About a month ago, I finally put pink (Ion Rose mixed with a little bit of Ion purple) and was loving it so much. Then it faded really quick, and second time I mixed a lot more purple, and later my hair faded into ashy blonde with a little bit of pink inside as it was a bit more stubborn to fade. At the point of dyeing, I had roots that's about half an inch of black and almost an inch of brassy brown, and I ended up putting the dye on the roots as well trying to cover whole head evenly.

So here comes the problem.. I thought I should go back to salon at least for root bleach and do pink again myself. She put bleach on my root for 45 minutes, and she washed my hair. Then I was terrified to find that I had NEON orange/salmon band that's about an inch thick around my whole head, like the color in this picture (I tried to find a picture online that looks like what my came out, please let me know if it causes any issue I will put it down): 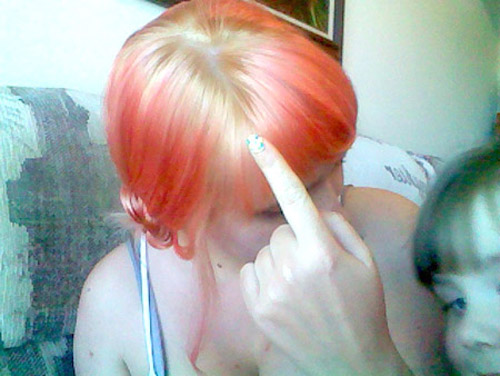 She put another session of bleach just on that band, but it did nothing. Then she put lavender on my entire head hoping it will kill orange, but I still have very obvious band, just a bit less bright as in the pictures (It's a bit more pastelized due to phone camera): 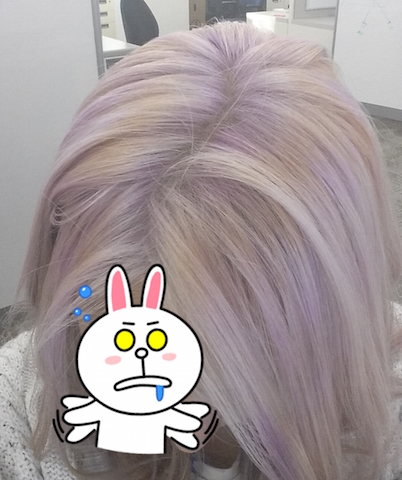 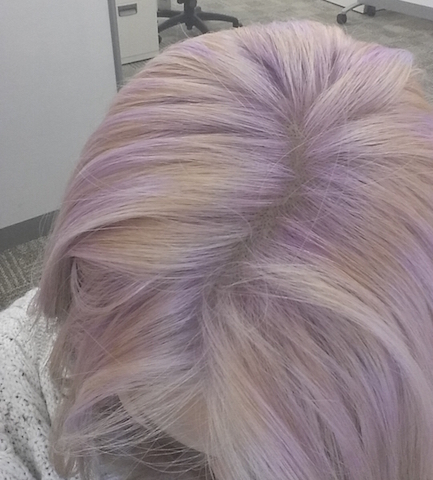 Is it really the pink dye that made my roots neon orange? Have you ever had that experience? Is it possible that pink faded on blonde but was still sticking on the roots and bleached to neon? Am I supposed to never put dye on my roots that's to be bleached? Or could it be from breaking the base? She charged me 200 dollars for doing all this for my hair, and I'm not happy with it. Is there anything I can do about this root?

I'm really afraid what I will look like when the lavender fades, and that I would never be able to go back to nice blonde base as even bleach is not helping it..

Thanks for reading the long post, and I will appreciate any advice! Please help!

i recently went pink, but didnt use any toner. it was fine since the pink was brighter and covered it. i really want to go more of a cool-toned light pastel pink (like cotton candy) now that its faded, but the yellow undertones are now clearly visible.
do i have to get remove all the color, tone it, then redye it? and what would happen if i apply toner on my current color, would it ruin the pink?

I currently have natural blonde hair. It is long with blunt bangs.

Sorry I don't have more pictures of it down or anything, but hopefully you get the point. Anyways, I dyed it pink with davines alchemic red conditioner. Basically it is a color depositing color conditioner that is meant to keep red hair vibrant, but when used in blonde hair, it turns it pink. The color was perfect, but it only lasted about three or four washes and then it turned into more of a slight pink tint that's barely noticeable. I knew it would wash out but I was okay with that because I only wanted to test out pink hair and see if I liked it. Well, I loved it.

Now I am looking for another temporary or semi-permanent color that will last maybe around a month and NOT stain my hair or fade to an ugly or uneven color. I would like to have the same color as in the pictures I've added. Pink dye is known to stain hair and I really really don't want that...I don't want to bleach my hair because I really love my natural blonde. Any suggestions?

Long time follower (talkin about like 7 years) here :) I currently have pink hair with a black underlayer. My roots have grown out, and my pink is a tad dingy from the black (no matter how cold I wash it lol). I have dark blonde hair naturally, and want to do another bleaching on the pink to lighten it up a bit because it was a medium blonde upon dying pink. I am wondering how I should do this...should I bleach my roots first, then ends? Or ends first and then roots? or first do roots, wash, then ends? You get the idea. Suggestions are greatly appreciated :) While I've had pink for a long time throughout the years, I'm wondering if there is a better way to do things.

Unfortunately I haven't been able to dye my hair pink for about 2 years. Working in hospitals kind of sucks :( I've been going through my house since I moved and realized that I have 6 full bottles of SE Atomic Pink and a half bottle that I've used before. I was thinking of selling them. Would anyone want them? I don't even know how much this stuff sells for anymore.

Thanks! And Happy Holidays!

Ive had pink in my hair for years. I wanna buy some more atomic pink dye, but also wanna do my tips purple.

do you guys like pimpin purple better or deep purple better?
and where do you suggest buying special effects? Im in canada so have to buy it online and ebay is so overpriced. 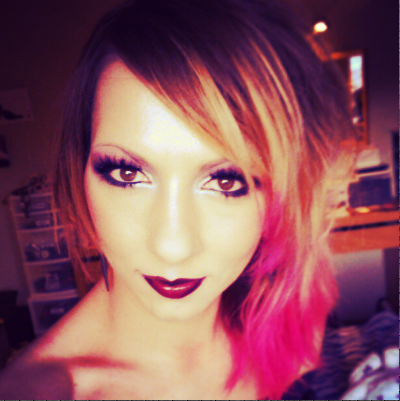 Hey, this community was super helpful in my search for baby pink hair, so I thought I'd share the results.

Hi everyone! I found this community whilst searching how to fade my pink hair and it looks like I can get some advice here hopefully.
( Collapse )
Collapse